It had been awhile since he'd gotten his pluck up enough to venture down to the sick-berth, even though his mate was still there recovering from his shot-wound. Evans disliked sick-berths and anything to do with surgeons, which explained his failure to visit Billy, but didn't excuse it. His private disgust with himself had built up over the days until he couldn't bear it any longer.

So it was that he made his way forrard after being relieved by the starboard watch, unconsciously toying with the hem of his jacket as he went. In the absence of a proper sawbones, it was easy to get into sick-berth. Bridgens was there, of course, sitting around like the useless lump he was. It was equally easy to ignore him.

"Ahoay there, Barrow," Evans greeted, mindful to keep his voice down, at least.

Billy raised his head from the gently swaying cot and craned his neck toward the door. "Tide," he whispered with a grin and a wave. The surgeon Mister Crozier was sleeping nearby, and Billy knew better than to wake him and earn a tongue-lashing. "Tidy, get me outta here. I'll do anything, just gemme out, mate!"
_________________
played by sans nom

"Guess that means you're feelin' better."

Now that was something he didn't hear often from Billy. Evans grinned. "Anythin'?"

He'd get his mate out, of course, but not without leading him on a bit first. He couldn't just let such a prime chance float past.

"Aye, anything!" Billy exclaimed softly, his eyes wide and earnest. "You know what I got, and I ain't got much, but whatever you want, it's yours! 'Cepting only my bone-handle knife and the little pearl I took offa Jamers. You don't know what it's like in here, Tide. Rather be in prison than here, an' that's sure!" He seemed to become choked up by his passion, but perhaps it was merely an effect of the wound.
_________________
played by sans nom

"Haveta think on it some," Evans told him. "But gettin' you outta here won't be nothin'."

All he had to do was get rid of Bridgens. The quartermaster glanced sidelong at the loblolly boy and thought briefly about knocking him over the head. But that wouldn't end well.

Bridgens started guiltily from what he was doing and looked around. "Eh? Oh. No, mate, can't take a turn without M'Clure or Mister Crozier say. You... you just leave him be," he added with a hesitant attempt at sternness.
_________________
Maggie Cotton
Billy Barrow
Jenny Ross
Paul Perry
Jack Deverel
Dominic Charcot

"Dunno that Mister Crozier is any state to say anythin'," Evans said, waiting for Barrow to crawl out of his cot. "M'Clure got an issue with it, he can come up an' have his say-so 'bout it."

Bridgens raised a forbidding hand. "Now, I think ye'd better not. Best wait till he comes back, M'Clure, or ask Mister Crozier hisself when he wakes up. Aye, best to wait," he repeated, agreeing with himself in the absence of anyone else who might back up his authority.
_________________
Maggie Cotton
Billy Barrow
Jenny Ross
Paul Perry
Jack Deverel
Dominic Charcot

"But just a quick jump to the head, Bridgey, is all! No, I don't want that bottle," Billy protested, waving away the implement he was offered. "Jis need a bit a walkin' is all, a few friendly faces of me mates. Cob Chase were s'posed to bring me some gr... grapes. And I ain't seen nor heard of him since the forenoon yesterday." Lying did not come naturally to Barrow, and he cast about for a quick change of subject. None coming to mind, he coughed for some time.
_________________
played by sans nom

"That'll be it," Evans agreed, ignoring Bridgens. "Lad needs the head, like any proper foremast Jack does. Lookit him! Easy, Barrow, Chase'll have them grapes for you. I seen 'em my own self. C'mon now."

He offered a hand to Barrow to help the coxswain out of the cot.

"What's all this?" A disbelieving voice said. "Stop there, fellow. You. What is going on here?" 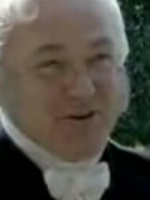 Billy jumped guiltily and collapsed back into the cot. He looked around in surprise at the voice, automatically accepting its authority in his own guilty state, but the only answer he could give was a series of coughing.
_________________
played by sans nom

Evans found himself staring at the white-haired newcomer. Who the devil was this? "Nothin' much special, sir," he said presently. "Billy here's just needin' the head, sir. Chance to stretch his legs, like."

"No, he ain't," Bridgens protested, speaking to all three of them inclusively. He looked at the newcomer and recovered himself. "Help ye, sir? The surgeon's... resting, an' the mate's gone ashore."
_________________
Maggie Cotton
Billy Barrow
Jenny Ross
Paul Perry
Jack Deverel
Dominic Charcot

"Indeed." James Farley eyed the sailor in the cot speculatively. "I daresay he is not meant to be stretching anything, by the look of him. You. I presume you are the loblolly boy?" This was directed at Bridgens. "Where is your surgeon? I have need to see him."

The shamefaced Billy hung his head and Bridgens felt some relief. Finally someone to back up his opinion!

"I'm the loblolly, aye sir. Bridgens," he answered, touching his forehead. "But you can't see the surgeon, sir. What ye need?" Relieved though he was, his face was stony at the idea of waking Crozier to talk to a strange gentleman. He narrowed his eyes at Evans, just daring him to point out the surgeon's cot.
_________________
Maggie Cotton
Billy Barrow
Jenny Ross
Paul Perry
Jack Deverel
Dominic Charcot

"I should like to hear a report from him," Farley answered. "About the state of things on board here. If I am to succeed him, it is only fitting to have at least a general idea of his practises."

Bridgens blinked at the man questioningly. "Succeed him? Sir?" He gave Evans and Barrow a wondering glance. Did they know anything about all this?
_________________
Maggie Cotton
Billy Barrow
Jenny Ross
Paul Perry
Jack Deverel
Dominic Charcot

Billy misinterpreted the look from Bridgens. "Mister Crozier's there, sir," he volunteered, pointing with his thumb. "He had his head opened for him a few days back."
_________________
played by sans nom

Had his head opened? Goodness. Farley blinked. "Has he," he said blandly, thinking that it would be difficult to speak with anyone who had undergone such a drastic surgery.

The sailor near the cot nodded. "He has, sir. Never heard of the like, neither. An' hardly the worst for it too."

"But he's prime, sir, prime, and still a fine surgeon," Bridgens insisted, feeling that it would be disloyal else. Even if Mister Crozier spent most of the day sleeping, he was still fully in control of the sick bay.
_________________
Maggie Cotton
Billy Barrow
Jenny Ross
Paul Perry
Jack Deverel
Dominic Charcot

There was an awkward silence. Bridgens stared at the newcomer and looked doubtfully at the sleeping Crozier. He cleared his throat. "So... you's a sawbones too is it, sir?"
_________________
Maggie Cotton
Billy Barrow
Jenny Ross
Paul Perry
Jack Deverel
Dominic Charcot

Farley nodded. "I am, indeed. What is your ailment, lad?" He asked of the sailor in the cot, who had begun coughing again.

"He went an' got hisself shot, sir," the other sailor said cheerfully. "Neat 'ventures ashore, or somethin'."