OOC Info
Important Note: By joining this board, I certify that I am aged 13 or over, and understand that I may be asked to leave if it transpires that I am under the age of 13 (Posting this application form indicates your acceptance of this caveat)
Username/Nickname: Mar
How did you find out about StC? I dreamed a dream in days gone by ...
Have you read our rules, and do you agree to abide by them? Certainly!

Character Info
Canon/Original: OC
First Name(s): Jeremy Matthew
Surname: Mitchell
Nicknames: none that he knows of
Age: 24
Sex: male
Place of Birth: Edinburgh
Occupation: Naval lieutenant
Family:
- Second son of Sir Matthew Mitchell and his wife Helen. His older brother Robert followed in his father's footsteps as a lawyer.
- Several of his relatives also serve in the Royal Navy, an uncle has even become an admiral of the white.

Description:
- nicely cut, heart-shaped face with a prominent jaw, huge brown eyes and upswept dark eyebrows
- medium height and a muscular built
- wavy dark brown hair, usually cut in a practical fashion
- fair skinned - even if freshly shaves, he constantly appears to have a five-o'clock-shadow
- usually in his uniform, which he tries to take good care of, and in search of a clean shirt or clean socks
- he is quick on his feet, has good coordinationand usually moves with grace
- due to a cut in the shoulder with a cutlass, his left arm is weaker than his right and he has a rather impressive scar

Strengths and Weaknesses:
- a good seaman and naval officer, who knows most of the tricks of the trade
- he is better on the mathematical subjects
- he has a certain scientific curiosity
- he can be a well of never-ending, cheerful encouragement - to the point where the patient gets better to stop him from being helpful
- while he likes teaching midshipmen, he is often not too good at it - he tends to get side-tracked by scientific explanantions or looses patience
- he sometimes takes things not seriously enough and has a certain fondness for pranks
- he is hard to anger and generally takes everything in his stride, but if one manages to get into his black book, one stays there
- on the other hand if he feels he owes somebody something, he will equally feel indebted to this person for a long time, regardless of what the other asks of him
- when put into a corner, he is a very fierce fighter, but otherwise he tries to avoid violence
- he has learned to be strict and enforce disciplin, but it is not a natural trait for him
- he has good eyes
- a knowledgeable astronomer
- while he will go there if required, he has no particular liking for small rowboats, since he got trapped under a capsized one as a midshipman
- can swim, though not too well
- doesn't get along well with animals
- he's allergic to cats (and probably to a few other animals as well, but he tries not to get near enough to find out)
- he is not too organized with his personal stuff, although he is much more organized when it concernes ship's business

Background:
Mitchel joined the Navy because that was the usual carreer for second sons in his family. Due to the support of his uncles, he managed a fairly steady career, and what setbacks he recieved were mostly his own fault (which he will readily admit).

He has served on two ships before the Terpsichore:
- the Porcupine, a sixth-rate with which he sailed to the Americas as a midshipman;
- the Squirrel, another sixth-rate, whose Captain Lawrence he still holds in very high esteem.

His burning ambition is of course to become the Admiral of the Red, but on short terms he will settle for a Captain's epaulettes and enough price money to live comfortably.
Mitchell passed his examination for lieutenant on the first try and in all other areas quite successfully, but was nearly failed because he had some difficulties answering some question covering the navigation by stars. His captain, quite disappointed when he heard that, strongly recommended that he spend more time studying the stars. While at first it was rather an obligation, with time and greater knowledge he developed a fondness for stargazing and can often be found doing that and as far as possible keeping abreast of the current scientific discoveries. He also has recently become the proud author of several small scientific articles.
Anything Else: --
Writing Sample/Past Roleplay: pass [He made a brief appearance here] 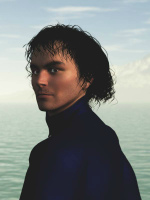