OOC Info
Username/Nickname: Sharpiefan, Sharpie
How did you find out about StC? I run the board
Have you read our rules, and do you agree to abide by them?Yes

Character:
Canon/Original: Original
First Name(s): Thomas
Surname: Oxley
Nicknames: Tom
Age: 16
Sex: Male
Place of Birth: Woolwich, England
Occupation: Marine Drummer
Family: Parents: Becky and Daniel Oxley, brother Samuel (Sam), who is four years older.
Description: Oxley is still growing. He is 5'2" at the age of 16, so he has plenty of time to attain his full height. He has relatively clear skin, though he still sports some pimples. He has dark blond hair, worn cut short on the new fashion, and blue eyes with a direct, open expression.

When on duty, he wears the dark-blue faced red coat of a Marine drummer, with his drum fastened to the broad white crossbelt that also carries his drumsticks when they are not in use. He takes care of his uniform and drum, though when off-duty he usually prefers to wear his own white trousers and a seaman's shirt without the Marines' blue-faced white canvas drill jacket, unless it is cold.

His older brother was pressed into the Navy when Oxley was about twelve, and he ran away from home shortly afterwards to join the Marines, partly because he wanted to find his brother, but partly because he had always had a fascination for the Marines in their bright red coats, and he didn't want to end up slaving away as a Dockyard carpenter for a pittance as his father did.

He is fairly quiet when there are officers around, but has been described as 'talkative' by sailors and fellow Marines. He is fairly thoughtful, although he can be blunt when expressing his thoughts or opinions, and doesn't always think before saying something. He is not one to deliberately get into trouble and needs some convincing to join in with the fun if he thinks it might lead to trouble, though he does enjoy a prank or two from time to time. He is a natural leader among the rest of the ship's boys aboard

Strengths and Weaknesses:
~ He is still growing, so there are occasions when he is still treated as a child.
~ He is independently-minded and sometimes speaks without thinking. He can be very blunt in what he says, which has led to getting into fights before now. He is prone to be scornful of people and things that he doesn't like.
~ He is friendly and honest, despite his habit of speaking his mind. He is loyal to his friends and will do his best to help them out when they need him, and he expects the same loyalty in turn.
~ He is illiterate, though he was taught his numbers when his father was sober for once. (Numbers are used in carpentry so that joints can be put together easily on-site.)
~ He won't back down from a fight, though things don't always go his way.
~ He doesn't like dark, closed in spaces, but doesn't like feeling weak and won't give into the panic he feels in such situations, especially if there are others around whose good opinion he values.

Background:
It wasn't easy, growing up in the Oxley household, with a drunken, bad-tempered father who preferred to spend his evenings in the local tavern, the Two Caulkers, drinking his meagre pay away rather than giving it to his wife to help with the household expenses, and spending time with his two sons. The only money coming in on a regular basis was from the washing that Mrs Oxley took in to be able to afford food and clothes for her family. She used to rope Tom Oxley or his older brother Sam into helping her, though as they grew older it was understood that they would go down to the dockyard to become apprentices in their father's trade of carpentry.

Living near Woolwich as they did, the boys used to see the local detachment of Marines drilling, or marching through the streets of the town between the dockyard and the Marine barracks, and often talked of enlisting. Tom Oxley in particular was fascinated by them, with their smart red uniforms and the fact that often they would have a young boy drummer with them, keeping the step. It was in 1804, when Tom was twelve, that a division of Marines was raised to be based permanently in Woolwich, along the same lines of the divisions in Chatham, Portsmouth and Plymouth.

Due to their father's drunken habits, Sam Oxley wasn't apprenticed at the usual age of twelve. It wasn't until he was sixteen that his apprenticeship was finally arranged, but as he went down to the dockyard to sign his indentures and begin to learn his trade, he was snatched by a press-gang. The twelve-year-old Tom Oxley saw what had happened, but couldn't stop them taking his beloved older brother and ran all the way home to tell his mother what had happened. At first, his mother was distraught, but then began to see it as a good thing, as it meant that there was one less mouth to feed. His father didn't seem to care one way or the other, though now there was only one target for his belt when he was in a temper.

It was when he found out about his parents' plans to apprentice him as soon as they could that finally prompted him to leave home, about two weeks after his brother's impressment. Thinking for some reason that to be apprenticed meant that he would also be pressed, and much preferring the Marines' smart uniforms to the slops he'd seen the sailors wearing, he slipped out early one morning to try to find a marine to enlist him. He also thought that going to sea would give him a better chance of locating his brother, especially as Marines were trusted to go ashore when sailors weren't, which might enable to him to pick up rumours about his brother.

At first, the marines he spoke to were reluctant to take him, thinking his wish to be some sort of joke, but he persevered and finally a corporal came out to speak to him, telling him about the ardours of life as a marine, He still persisted and was finally given the King's Shilling. He had never seen so much money at once in his life before, and wanted to go and spend it.

When his father found out about his son's enlistment, he went along to the Marine barracks to complain that they had enlisted an apprentice and had to release him. On being questioned by the sergeant, Oxley denied seeing or signing any indentures, and his father was informed that Tom's enlistment was legal and above-board and could only be reversed on payment of a guinea 'smart money'. Not having such a sum, his father went away, disgruntled.

Training went well and soon after completing it, Oxley was posted to his first ship, Atalanta, a 36-gun frigate under the command of Captain Pimbury. He spent two years aboard her before being transferred to Terpsichore, where he shares the duties of Marine drummer boy with the Shepherd twins and - occasionally - Appleby.

During the attack on the fort, he met up with his older brother, Sam, four years after they were parted, and has just found that Sam has been transferred to Terpsy along with an officer and a draft of men from Defiance.

Writing Sample/Past Roleplay:
The Sergeant had been quite reasonable up till now. Oxley was already rigged out in off-duty rig; the tailor was working on cutting down a jacket for him. He stood against the wall in awed silence, watching the altercation between his father and the kindly Sergeant Meadowes.

"I've told you already, Mister Oxley, that if you cannot produce proper indentures for this boy, signed by him and his master, his enlistment stands. He's attested already, in front of an officer of the Corps and a magistrate."

He could see his father shrink slightly at the mention of a magistrate.

"Don't want no trouble," he said humbly, though the look he cast his son was as venomous as anything Oxley had ever received from him before. He bit his lip at the thought of the belting his father would give him if the Sergeant did decide to let him go.

"It'll be a guinea to get him out, or else he stays," the sergeant said.

Ain't got that kinda money," Oxley's father mumbled, twisting his hat in his hands.

"Please see this good man out of the barracks!"

Oxley slumped with relief as his father left.

He has been recently reunited with his brother, who joined Terpsichore on 23 May 1809 from HMS Defiance

From his attestation form: 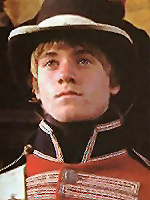