(This is likely to be a short self-thread; I just wanted to show Vickery writing one of his letters home.)

Vickery had his writing desk open, with a sheet of paper laid upon the green leather. The travelling desk and its contents, including two of the new brass-nibbed pens, had been a parting gift from his sister. Right now, he wasn't sure he appreciated the inclusion of the recently invented turned wooden pens as they meant that he no longer had the excuse of mending a quill to delay him from beginning the letter.

He had finished the letter to his sister over a week ago, and could no longer delay writing to his mother. It was just... She seemed to be impossible to write to, because he couldn't really talk about Army life to her, and there wasn't really much in the way of Society out here.

The opening was easy enough, of course. And then he could mention Torrington - he had known of Torrington's family by reputation of course, and thought that their fathers probably had some nodding acquaintance. Maybe his mother would care to receive Torrington's mother and sister in Town at some point?

He found himself nibbling his pen at this point and wiped the nib, thinking what else he could say. A glance at Emma's letter reminded him, and he dipped the pen again, adding congratulations on his brother's engagement, and hoping that his mother would refrain from trying to find someone for him, at least while he was still in Portugal.
_________________
Character by Sharpiefan | Banner by sans nom | Timeline | Wiki page

King George commands, and we obey
Over the hills and far away ~ Traditional 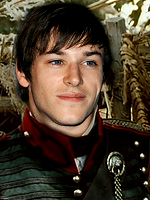