Show the Colours :: The Second Division :: Elsewhere in the 2nd Division

Cotton hadn't realised just how much he had missed Maggie over the past week or so. It felt like a dull ache inside, a sort of tightness in his chest.

When he finally found her, she was wrapped up in her blanket, curled near the dying ashes of a small fire. Not quite the sort of reunion he had envisioned, it seemed about right for the relationship they'd had so far. He sat down with his rifle across his lap and studied her in the dim glow of the fire's embers. Her coppery-coloured hair glowed red in the light, tumbling about her face because her cap had fallen off. She looked almost peaceful, though there was a slightly worried frown on her face that didn't seem to disappear even though she was asleep.

She looked beautiful, to Cotton's eyes, although he was willing to admit that he was biased. He smiled, laid his rifle aside and stroked her cheek softly with a finger before leaning forward to brush a gentle kiss there. He sighed quietly and turned to get his own blanket, wrapping it around himself and lying down facing his wife. He wanted to be the first thing she saw when she woke.

He found himself winding a strand of her hair around his finger and sighed quietly, before slipping an arm around her, risking making her panic if she didn't realise who it was who was holding her before she was fully awake.
_________________
Character by Sharpiefan | Timeline | Wiki page 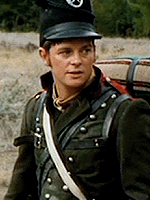 It was still dark when Maggie awoke, dark enough to be night. She could tell it was nowhere near the time she would normally rise, so why was she awake at all? Something had disrupted her sleep. She had rolled over at some point, but there was a warmth behind her and an arm around her that was all perfectly normal. Gabe. But no - he was a prisoner of the French!

She was now completely awake and alert, her muscles frozen rigid and her eyes open wide. Who was this man lying next to her? She did not dare move for fear of waking him. Did he have some evil intention? Or had some rifleman rolled over in his sleep and dreamed that his wife was beside him? She wondered if she could slide out from under his arm without waking the man. Probably not. Best to do it in one quick motion. She abruptly pulled herself away and got to her knees, ready to run if he awoke and tried to grab her. She could not tell if he had awakened or not.

Something poked him in the shoulder, and Maggie's presence wasn't there any more. He stirred, swiped at his eyes and blinked up at the person kneeling over him in the dark. "Maggie?"

She looked at his dark shape mistrustfully. Was this just a dream? It seemed real, but dreams often seemed real at the time. But, she decided, even if it was a dream, why not enjoy it while she could? "Gabe!" she laughed, and threw her arms around him, kissing his cheek. "Gabe, Gabe, my Gabe. What are you doing here?"
_________________

She didn't believe it was him, not really - and who could blame her, after all? There was a pause and then she startled him by throwing her arms around him.

"We escaped, Maggie. Took us a week walkin' through them hills to get back to the Army." He chuckled, putting his arms around her in turn. "You ain't dreamin' it, neither. It really is me, truly honestly, sweeting."
_________________
Character by Sharpiefan | Timeline | Wiki page

He nodded. "Took us a whole week to get back here - had to keep up in the hills to make sure they didn't find us, an' there ain't no roads up there, only jus' goat paths."

He shifted a little to get a bit more comfortable. "Seen the Captain already. An' I was awful worried about him, too... Well. We thought... we thought he'd been killed."

He raised a hand and found himself winding a strand of Maggie's hair around his finger. "Was really awful worried about you, though, sweeting."
_________________
Character by Sharpiefan | Timeline | Wiki page

She gave him a bittersweet smile in the dark. "I was all right. Poor Captain Vickery though. He was fair cut up in the side, and his head had been knocked about. You should see the state of his jacket," she laughed. It was easier to talk about Vickery, for some reason. Jem had never liked to know how much she worried about him, and nor did she want Gabe to be upset by her fears of the past nine days. "I looked after him as best I could, and another officer's batman came to help him, fellow called McIntyre." She looked around to see if she could spot him. He was usually sleeping near to herself, for they both stayed near the captain's tent.
_________________

"Here, you can't be all that comfortable, kneelin' like that," he said, suddenly realising that while he was sitting, she was still kneeling. "Has the Captain bin all right, though? Have you bin all right?"
_________________
Character by Sharpiefan | Timeline | Wiki page

She opened her eyes again to look at him. "Are you really back? You won't disappear when I wake up?" It felt like such a long time since she had been so happy. She knew she ought to be tired, exhausted by the week's relentless march away from the French, but she did not want to miss seeing her husband before he vanished again.
_________________

Show the Colours :: The Second Division :: Elsewhere in the 2nd Division