18th July: Another day in paradise

While Bolitho understood why the boy was frightened, assault among the crew was a serious matter, especially assault of a young man. He would not tolerate any such behaviour among the men, and while he did not wish to force De Guarde to talk, he needed to know the culprit.

"I realise that this is difficult, De Guarde, but I must stress how important it is that you tell me who has assaulted you," he said, "Our crew needs to function as a cohesive unit, not live in fear of each other. Thus if there are those who wish to lord their will over others through physical violence, I would know exactly who he or they are."
_________________
Character played by Biggles

"I know sir." De Guarde said quietly. "...it's just,..even if I tell one name...I don't know the names of those who might be his friends. If he gets in trouble because of me, I end up dead." he hesitated."....And I can't go throwing accusations at the whole crew....nor just at those that might know him, to stop that from happening." He tilted his head a little and then dropped his gaze again. "Same as I don't know who threw me, sir...but if these two are connected in any way....and I don't know that either.. it means that it wouldn't be just an unfounded fear, sir." From once so willing to accuse even the ship's cat of mutiny, he was now quite the contrary.

Sewell cleared his throat and shifted his weight to stand more behind DeGuarde.

"There are positions on board where we can protect him from retaliation, even if you want to uphold his banishment before the mast, Sir. If need be, let him join the Marines. We keep our own safe enough." 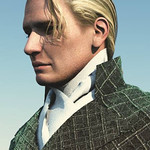 "I understand, De Guarde. I really do. But I need to know who has done this so his abuse may be curtailed. Not just towards you, but towards anyone else he may wish to force his malice on." Bolitho did not want the boy to run afoul of any retaliation, but this matter needed to be dealt with, and swiftly.

Sewell had an admirable suggestion, Bolitho thought, as he turned towards the Marine lieutenant. But that decision predicated on whether the boy actually wished to become a Marine. Not as good as being promoted back to his midshipman rank, obviously, but not a sailor either. "Well, if you are willing to take him on as a Marine, Mister Sewell, I will allow it. Of course, that is only if the lad wishes it." He looked down at De Guarde again. "What do you think of Mister Sewell's offer, De Guarde? Would you wish to join the Marines?"
_________________
Character played by Biggles

De Guarde looked up briefly, first at the captain, then at the marine officer and then again at the ground. This option offered him safety. If he would be among the marines, no sailor would dare come too close and none of the marines were friends of Cattling's. That was probably as certain as the fact that his bruises were starting to ache quite uncomfortably.

The question was whether he could ever aspire to become a midshipman, lieutenant or captain, if he donned the red coat. Would this service be, similarly to his assistance of the surgeon, something that he did as punishment while he was before the mast, or a permanent change? It was quite obvious that he was thinking about it and that he would not take the decision quickly and just for the sake of having one.

Sewell squared his shoulders and stood at parade rest, emanating as much safty and calm reassurance as he could. It would be a shame if this forced change ruined the boy's chances for a naval carreer (and Sewell thought that a likely outcome), but the loss would definitely be the navy's, not the Marine's.

Bolitho sighed. He knew the lad would not like to hear what he was going to say, but there was nothing for it.

"Yes De Guarde. I am sorry to say it will affect your future career. If you choose to become a Marine, you will remain a Marine. You will not be able to return to your position as a midshipman later, nor ever aspire to a higher naval rank. So I'm afraid you have a difficult choice ahead of you, one which I do not expect you to make now. Take as much time as you need to decide. To facilitate your decision, as much as I need to know who has been abusing you, you do not have to tell me that now either. I hate to have you run the risk of further punishment, but out of concern for any possible retaliation, you may wait until you have made your decision before making the identity of your attacker known."

Glancing at Sewell, he added, "Perhaps you can keep an eye on the boy in the meantime, Mister Sewell, to hopefully avoid any further injury, if possible."
_________________
Character played by Biggles

De Guarde remained silent. Perhaps before he had looked eagerly onto becoming a marine. Time had passed and he no longer knew what he wanted except to not die and to be safe. His hopes of becoming something more than a sailor, would soon be lost if things continued in the same direction as they appeared to be.

His fear of Cattling on the other hand grew every day. The fear of him and his pals and there was nobody who did much to dash them. Well, he was unfair, wasn't he? There was lieutenant Sewell, there was lieutenant Mitchell. There were the marines, not all, but some, that might offer him safety, but was it not supposed to be his own peers to do that? Not officers, nor marines?

If the captain never promoted him then he was better of just taking the offer to become a marine. There perhaps he could never become a navy captain, but he could atleast become the captain of marines, he could at least be an officer one day. He wondered if his parents would approve of it, or whether they would be terribly disappointed. Well, they could be no more disappointed than they would be, if they heard he was a mere sailor anyway.

He sighed. It was not an easy decision, no easier than the one to have Cattling taken under arrest for his crimes but atleast he might now be offered a little protection. He was even willing to be taken in Irons if that would keep him safer, after all, he did not know what Cattling would think he had said, once he saw him leaving the captain's cabin.
_________________

Sewell considered his options for a moment, then suggested:

"I would like to run some drills, Sir, to improve the way sailors and marines work together. Permission to take one of the boats and a random selection of marines and sailors?"

The scenario he had in mind - a random, but small number of people having managed to rescue themselves in a boat after a some undisclosed catastrophe ashore with the aim of getting back to Terpsychore - would in his opinion be a good training for the crew, and it would keep DeGuard under his close eye for the time being. If the Captain agreed to the plan, it would also be a good opportunity for one of the midshipmen or even one of the lieutenants to exercise his command skills.

"Capital suggestion, Mister Sewell." Bolitho nodded. It was a good thought, for many reasons. "Select whomever you wish to participate in this drill." Presumably he would take De Guarde, along with whichever men Sewell thought to be capable enough. Hopefully they would all learn something from it.
_________________
Character played by Biggles

De Guarde listened carefully. Training would be good, if a random selection would have luck on his side, the normal sort of seamen would be on the boat. But just to be sure it did not end in him remaining on board he added softly. "Permission to volunteer, sirs?"
_________________

"Thank you, Sir. I'll have you a list with the names by morning - the lieutenants certainly will be able to suggest those in their divisions who would profit most from this exercise."

He was already metally running through the Marines list - Thompson perhaps; a good test to see how he had settled in as corporal. One of the Shepherds; they needed to be broken up a bit more. One of the younger Privates for experience, and another steady man as insurrance. DeGuarde would certainly be included in the prty, but he also had a mind to include Cattling - that way he would not be able to cause any mischief unobserved, or rally forces, and if he tried something under Sewell's eyes ... well, then the need for De Guarde to speak out would be gone. Keep friends close and enemies closer - and whether he realized it or not, Cattling had made an enemy.

"DeGuard, you will be included. Talk to the surgeon - he will provide you with some bandages, just in case. Is there somebody you would like to see included, Sir? Perhaps one of the officers or midshipmen?"

"Thank you for volunteering, De Guarde. You shall certainly be a part of the exercise." Bolitho nodded. As he had expected.

"Excellent, Mister Sewell. Bring me the list once you have it prepared. As to whether I would like anyone in particular to be included..." He tapped his chin thoughtfully. All of the officers were more than capable. Any of them could participate. "No, I can't say I have a preference. Whomever wishes to volunteer first shall surely be up to the task."
_________________
Character played by Biggles

"Very good, Sir. If I may, I will see to it immediately."

He placed a hand behind DeGuarde's shoulder, ready to propel him out of the room should the Captain indicate that they had fininshed.

"Yes, you may. In fact, if you have nothing further to add, you may both be dismissed, since you each have a good deal to think about, and I would not wish to detain you any longer." Bolitho gave a slight nod. "I thank you both once again for bringing these matters to my attention."
_________________
Character played by Biggles